5 Mental Mistakes You Should Never Make On The Golf Course

We came across these great tips, and just had to share them.  All golfers have fallen victim to these pitfalls at one point in time.  It’s recognizing them and avoiding these mistakes that will help make you a great player.

Most golfers lose way too many shots to poor mental decisions and not knowing how to systematically approach each shot and control their emotions to maintain confidence. This article will show you the 5 most common mental game mistakes that most golfers make and how to eliminate them.

1. Don’t analyze your swing or think about it while swinging 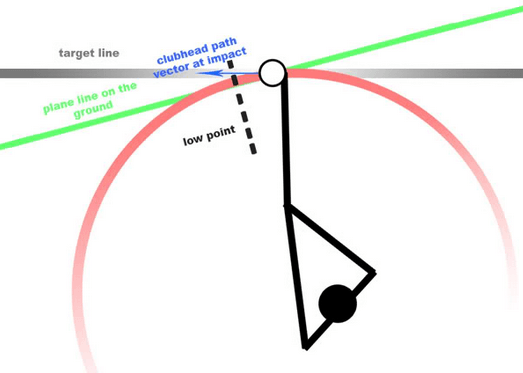 Any thoughts about your swing on the golf course is counter-productive to a good score, whether it be in between shots or during your swing. Trusting what you have is far more important than trying to correct something or forcing a movement while swinging. Trying to consciously control your body during any action makes the task more difficult. Think about if you drove your car while consciously thinking about what your body is doing (“foot on brake, now accelerator…”) and you’d probably get into a crash! Instead you simply trust your ability as a driver. Thinking about your swing while swinging creates tension which interferes with the free-flow of a good swing. It’s fine to think about it on the driving range when you’re practicing a new movement you’ve learnt in your golf lessons, but on the course your mind has to be quiet to play your best. Swing thoughts usually creep in during a round when a few wayward shots are hit, and subsequently the golfer analyses the swing and attempts to correct the problem. A lot of these off line shots are simply caused by tension, which increases with the more control over the swing the golfer attempts to have. There’s a saying that In golf, “You need to give up control to gain control” and I strongly believe that to be true. Instead of being focused on the body’s movements, we need to be connected with the objective – to hit the ball to a specific target with a pre-determined shot shape, and then trust the body to do what we’ve practiced. The best swing thought is to trust the swing you have, but if you need some help, you can try saying the words “one-two-three” – “one” for the back-swing, “two” for the down-swing and “three” for the follow-through. This should help eliminate the swing thoughts.

2. Don’t think about score (unless you really have to) 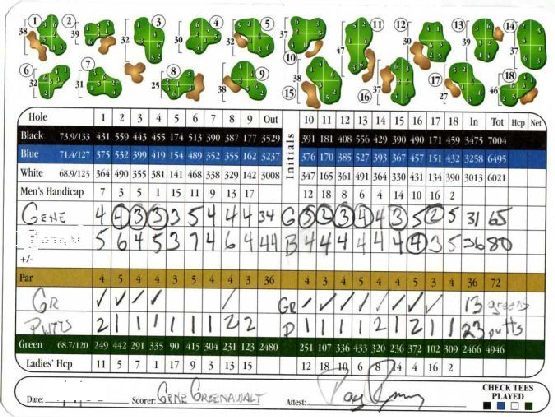 Unless you’re in a situation where you need to know your score for strategy, like during the closing holes of a tournament, it’s best to forget about it. Some of the best rounds in history have been shot while the player didn’t know what his/her score was. You’ll find that when you play your best, it’s like you don’t care about your overall performance and you don’t judge it, you’re just enjoying playing the game and hitting good golf shots. This is the mentality we need during every round. Score is something that is external and out of your control. Tying your performance to it can create a roller-coaster of emotions. If score is your absolute goal of the game, how are you going to feel when you score an 8 on one hole? Will it dent your ego and ruin your round? If you can shift your goal for each round from score to executing a good process and just enjoying the game no matter what, you will score better. Your focus has to shifted from outcome to process to play your best.

3. Don’t beat yourself up, be your own caddy and remember it’s just a game 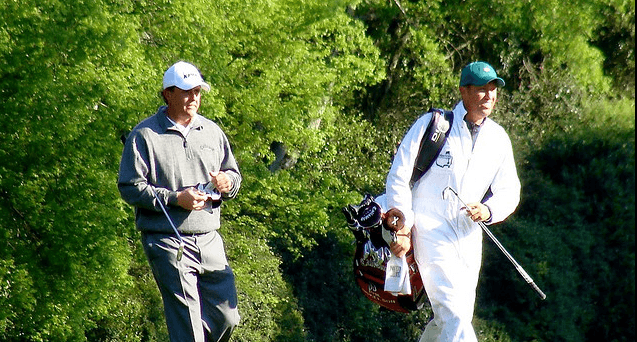 How you talk to yourself on the golf course can make a big difference in how you perform. Caddies are generally selected, not only because they can calculate yardages and read greens, but more so because they know what to say to a player and when to say it. You can bet your life if Adam Scott hit the ball O.B. and Steve Williams was to say “What the @#$% was that? How can you hit a shot like that you loser!”, he would be fired on the spot. Saying such things, doesn’t help a player, it would lower their confidence and make them more tense before the next shot. Instead the caddie would offer some encouraging words to help the player forget about it and move on. Most of us don’t have the luxury of a caddie, so we have to create our own “inner caddy”, so we boost our confidence and bounce back quickly from shots we’re not happy with. To do this, start to develop a list of phrases that you can say before and after a shot. Unless you’re playing golf for your livelihood, it really shouldn’t make you upset. After all it’s a game that allows you to practice real life challenges, like facing adversity, focusing, having a positive attitude, staying in the present and so much more. Think about this next time you hit the ball in the trees.

4. Don’t just aim at the fairway or green – have a very precise target in mind 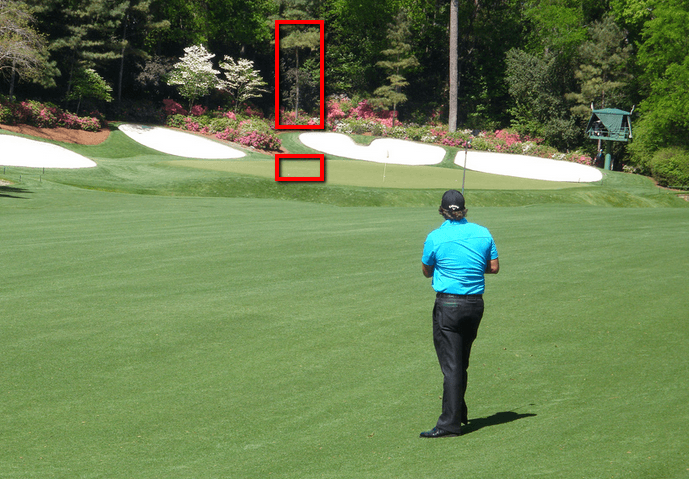 As a continuation of #3, caddies will always help their player pick a very precise target instead of telling them to aim down the fairway or at the green. But most amateurs do exactly that and it costs them several shots per round. Ask any of the top players and they’ll tell you that they make their target as small as possible. In the photo above, Phil Mickelson’s target might be that thin silver tree branch behind the green. It definitely won’t be the whole green or even one half of it. Next time you’re out there, make this a part of your pre-shot routine and you will notice the difference.

5. Don’t forget about your routine

The shot routine (which includes the pre-shot and post shot routine), is an absolute must if you want to play your best golf. It’s the most effective way to ensure that you choose and commit to the right shot and then have the optimal reaction whatever the outcome. If you don’t have a very meticulous routine (which eventually becomes a habit) you are simply throwing away shots. And it can all be done easily in the one minute allowed. This one ties in nicely with Mistake #2. Instead of making score your goal, make your routine your goal for very round and focusing on everything that’s great about the experience in between.