One of the greatest aspects of playing golf, is that it allows you to get out in nature.  And even though we are playing on wonderfully manicured pieces of property (most of the time), we occasionally find objects that just get in our way.  Sometimes they get in the line of the golf balls flight to the hole, while at other times they get in the way of your swing.

Then according to Rule 24-2 of the Rules of Golf which covers immovable obstructions: 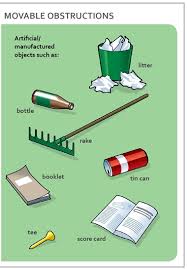 Okay, now lets try to clarify and simplify this a bit.  Obstructions are artificial, or man made, objects that you come into contact with on the golf course.  A sample list of such items would be: bunker rakes, other players’ golf clubs, stakes (except out of bounds), signs and ropes, bottles and cans, plastic bags, abandoned balls, cables.  The list is endless of what could be considered as an obstruction, but being able to recognize these items and knowing how to take the proper relief will save you shots on the golf course.